The term – the Thin Green Line – was coined by Eric de Place, policy director at the Sightline Institute in Seattle. It refers to the uniquely powerful position in which climate activists in the Pacific Northwest find themselves, as the fossil fuel industry targets this region for massive coal, oil and natural gas export facilities. The ports along the lower Columbia River are the closest and most economical points from which to ship all the fossil fuel being dug up in the middle of North America to markets in Asia. If communities along this route can stop these projects, all this coal, oil and gas will have no where to go, and will have to be left in the ground, where it can safely be sequestered for millennia to come and we can prevent massive amounts of carbon dioxide from worsening climate chaos. 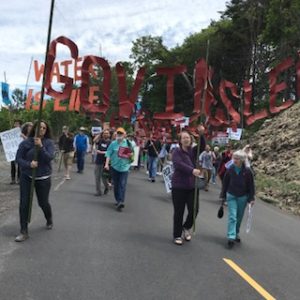 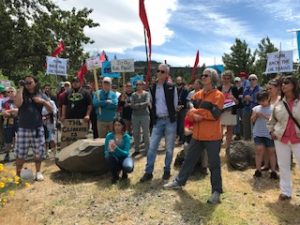 On June 3rd, 2016, all eyes in the region turned to the tiny town of Mosier, Oregon, as firefighters battled for 14 hours to contain a dangerous fire from a derailed Union Pacific train carrying highly flammable Bakken crude oil. Students at the Mosier Community School and some residents were evacuated, oil spread in a sheen on the Columbia River, and the community of Mosier lost sewer and water service for days. Once the fire was out, tribal leaders, elected officials, and local community members gathered at the site to call for an end to oil train traffic through the Columbia River Gorge.

One year later, Mosier’s groundwater is still contaminated, and oil and railroad companies are seeking to expand oil and coal train traffic through the Columbia River Gorge, despite opposition from Columbia River Tribes, the town of Mosier, and many larger cities along the potential route.

On the first anniversary of this near disaster, hundreds of people gathered at the Mosier Community School to call on Washington’s Governor Inslee, to deny the Tesoro Savage oil train terminal in Vancouver, a project that would bring up to five loaded oil trains each day through the Columbia River Gorge. The crowd listened to impassioned speeches by Tribal leaders, a Vancouver, Washington city councilwoman and former Hood River city commissioner, all calling on Governor Inslee to do the right thing.

THESE ARE THE GROUPS WHO ARE WORKING TO STOP FOSSIL FUEL DEVELOPMENT IN SW WASHINGTON.